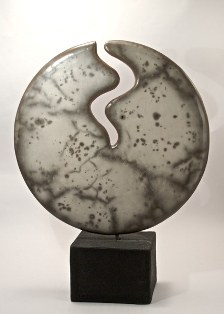 Kati was born and lived until her early twenties in Budapest, Hungary, before moving to England in 1965. For over 25 years now her home has been Devon in the South West of the country, a county famous both for wonderful scenery and long traditions of pottery.
Her love and fascination with clay and ceramics stayed with her all her life. About 20 years ago her dream of eventually becoming a professional ceramicist came true.
She studied at the Universities of Tulane and Santa Barbara, USA. While in America Kati studied many examples of Pueblo Indian pottery. This became a fundamental inspiration for her own work. She was fascinated by the contrast between the beauty and sophistication of the pieces on the one hand and the seemingly, simple methods of production on the other. Native American Indian vessels are shaped by hand and while still damp, the surface is burnished with smooth pebbles. Traditional patterns are carved or painted using vegetable and mineral pigments. Firing takes place outside, on the ground. The end result depends on how the fire is controlled. Some pieces are pitch black and shiny, others colourfully decorated. Each pueblo have their own traditions and style. Kati adapted some of the technique to develop her own work. Burnishing and smoke firing are the signature of her style.
She works on the potter’s wheel. Her aim is to create simple and classical shapes that are inviting to touch and hold. She makes mostly vessels but also abstract sculpture and some simple jewellery.

“The surface remains unglazed. The silky sheen and smoothness is the result of repeated burnishing with polished stones. This is a long process, requiring patience and attention. During the final firing the pieces are exposed to dense smoke created by burning sawdust, wood shavings and newspaper. The smoke is applied in various ways and temperatures to achieve different effects; spontaneous irregular carbon marks, strong colour contrasts or deliberately “drawn” patterns. This stage is the most exciting. My role is to direct and influence but never completely control the natural interaction between clay, heat and
smoke.The finished piece is always individual, often a surprise l and impossible to replicate exactly.” – Kati Vamos

Mathias and Kirsten at 45 Southside, on the Barbican in Plymouth, are looking forward to exhibiting Kati Vamos’ work from the 27th of March 2011 to the 17th of April 2011. The exhibition includes a gallery talk and demonstration by Kati on the afternoon of the 27th of March from 2.30pm. All are welcome.